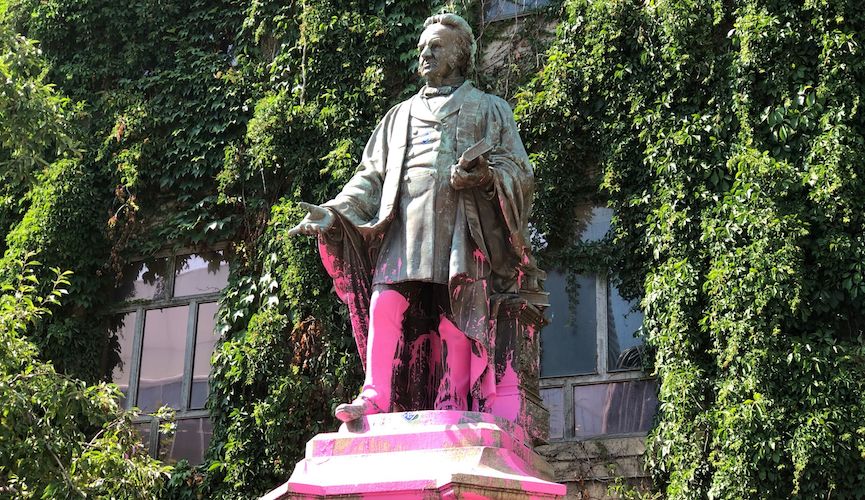 Ryerson University, like most academic institutions in Canada, operates on, and occupies stolen land. Land that belongs to the Anishinaabe, Mississaugas, and Haudenosaunee peoples – who have historical, and quite frankly, contemporary, ownership in the territory. They represent the Indigenous populations in the ‘Dish with One Spoon’ treaty – an agreement signed that invites settlers, newcomers, and all who live on the land to equally share its goods and exist in harmony with one another. On the Ryerson University webpage regarding the institution’s official land acknowledgement, it is highlighted that on the table upon which the Dish is placed, and around which we all sit, there are to be “no knives….representing that we must keep the peace”.

Ryerson University, however, is not following through with this agreement. The statue of Egerton Ryerson on campus is a knife that threatens the peace. It is evocative of over 150 000 knives, one for each Indigenous, Métis, and Inuit child who suffered through the Residential School system in Canada – of which Egerton Ryerson was the chief architect of. It is naive of the University to expect that reconciliation and justice can occur while an homage to a man, whose actions towards the achievement of white domination in this country have destroyed Indigenous communities and stolen the lives of thousands of children, stands in the centre of our campus.

The RSPSU will always stand with Indigenous peoples across the nation, and beyond. We add to the many voices who call for the removal of the statue of Egerton Ryerson, and call upon the School of Performance, as well as all other FCAD schools and student groups, to do the same. If the University is actually committed to reconciliation with Indigenous communities, it would not hesitate to take the statue down. The need for secure and safe spaces for all Indigenous, Métis, and Inuit peoples in Canada are non-negotiable.

With love, and solidarity,

The RSU doesn’t care about you, here’s why.

Welcome to the RSP